1, the characteristics of imidazole curing agent

(2) The curing activity is high, and the curing can be performed in a short time under medium temperature conditions.

(4) In addition to being used as a main curing agent, it can also be used as a co-curing agent and a curing accelerator, which can significantly improve the performance of an epoxy resin curing system.

In addition to the above advantages, imidazole epoxy curing agents also have some shortcomings and problems, which are manifested in:

(1) Most imidazole compounds are high-melting crystalline solid powders that are difficult to mix with liquid epoxy resins and have poor process performance.

(2) Imidazole curing agents have a certain degree of volatility and hygroscopicity at high temperatures.

(4) Commonly used imidazole curing agents have high curing activity and therefore have a short pot life after being mixed with epoxy resins and cannot be stored as a one-component system for a long time.

In order to overcome the disadvantages and deficiencies of commonly used imidazole epoxy resin curing agents, the simple imidazole compound is modified to synthesize new imidazole derivatives, which is an effective way to solve the above problems. The specific method utilizes the reaction activity of the nitrogen atom at the 1 position and the nitrogen atom at the 3 position of the imidazole ring of the imidazole compound to react with other compounds, and the active site (secondary amine group, tertiary amine group) on the imidazole molecule is closed by forming a steric hindrance. Thereby reducing its reactivity, and improving its compatibility with epoxy resins, while giving its epoxy resin cured material special properties.

The curing mechanism of the imidazole epoxy curing agent is as follows:

Veronique et al. use various imidazoles and various chloroformates to react, and the resulting product can be used as a main curing agent for epoxy resins and an accelerator for other curing agents. For example, when 100 g of bisphenol A glycidyl ester (epoxy value 5.54) is mixed with 14.5 g of phenyl chloroformate/2-phenyl imidazole, the gel time is 6 min 15 s at 130Â° C. at 150Â° C. The gel time was 3 min 15 s, and the gel time was 2 min 30 s at 150 Â°C. In addition, benzyl chloride can be used as the quaternary amination reagent of imidazole. The quaternary amination reaction of imidazole occurs first on the nitrogen atom at position 3, and is converted into the nitrogen alkylimidazole at position 1 in the alkaline medium. The product is further alkylated to obtain 1 ,3-Dibenzyl imidazole, this modified imidazole curing agent also has better curing properties.

Imidazole and acrylonitrile were reacted in benzene and ethanol respectively to obtain 1-cyanine odor and low toxicity. The curing agent can be a medium temperature curing epoxy resin, has a high thermal deformation temperature, and has substantially the same properties as aromatic amines. And with the epoxy resin, anhydride curing agent compatibility is good, suitable for a long period of active ingredients, and its cured material has excellent electrical properties and mechanical properties.

Chen Yebai also used Lewis acid as a catalyst to react with imidazole and alcohol, and reacted at about 100Â°C for 10 hours to obtain imidazole accelerator BMI. BMI is a colorless, transparent liquid with low viscosity, low volatility, non-irritating odor and low toxicity. The curing agent can be a medium temperature curing epoxy resin, has a high thermal deformation temperature, and has substantially the same properties as aromatic amines. The compatibility with the epoxy resin and acid anhydride curing agent is good, and the active period is long after the compounding, and the cured product has excellent electrical properties and mechanical properties.

Mckenzie et al. used imidazole and epoxy compounds to prepare a new imidazole solid agent, 200g of Epon 828TM epoxy resin, 87.8g of 2-phenyl imidazole, and 300 mL of deionized water, and reacted at 70Â°C. When the temperature reached 102Â°C, the reaction mixture was The aluminum tray was cooled and vacuum dried to give a product that was solid at room temperature. Masahiko et al. dissolved 82 parts of 2-phenylimidazole and 150 parts of AER330 epoxy resin into 400 parts of xylene to obtain an adduct (curing agent), and 8 parts of the adduct were mixed with 100 parts of epoxy resin AER331. A mixture was obtained with a gel time of 120 min at 4.5Â°C. China's 163 curing agent, 704 curing agent and 705 curing agent are 2-methylimidazole and propylene oxide isooctyl ether, propylene oxide butyl ether and epoxypropyl isooctyl ether adducts. In addition, the polyisocyanate is evenly coated on the adduct of imidazole and epoxy resin, and the storage stability and curing performance of the curing agent can also be improved.

3.5 Modification with aldehydes or ketones

The literature states that the reaction products of imidazole and aldehyde can be used as coatings, adhesives, laminating materials, and potting materials in combination with epoxy resins. For example, 34 g of imidazole and 41 g of 37% formaldehyde are stirred and reacted at 90Â° C. for 4 h, and then the unreacted material is removed under vacuum to obtain a curing agent. The composition of 100 parts of Epon 828 resin and 3 parts of the curing agent was cured at (80Â° C./2 h)+(150Â° C./3 h), the glass transition temperature was 166.6Â° C., and the Izod impact strength was 6.4 J/m. The tensile strength was 44.8 MPa, the elongation was 2.3%, and the thermal denaturation temperature was 145Â°C.

Imidazole acetate and lactate obtained by the reaction of imidazole with acetic acid and lactic acid can be used as an epoxy resin curing agent. A mixture of 100 parts of epoxy resin and 2 parts of 2-ethyl-4-methylimidazolium acetate is stored for 5 days at room temperature; a mixture of 100 parts of epoxy resin and 3 parts of imidazole lactate is stored at room temperature Up to 10d. Sawa et al. used an imidazole reaction with cyanuric acid to prepare an adduct for use as an epoxy curing agent. For example, 100 parts of Epon 828 and 5 parts of an adduct of 2-methylimidazole and isocyanate were mixed and the pot life was 7 days. The curing system of an adduct of imidazole and salicylic acid with an epoxy resin has a longer shelf life and low reactivity at room temperature. The imidazole compound and a reaction product cannot satisfy the low-temperature curability and storage stability at the same time, but two kinds of effects can be achieved by using two kinds of monobasic organic acids to gradually react and adding benzyl alcohol at the same time.

SuWei-Yang et al. used a mixture of an addition product of a lactone and an imidazole with an epoxy resin to prepare an adhesive that can be used on a filament power supply winding. Isocyanate (such as toluene diisocyanate) is used to block the active groups of imidazole and its derivatives, and the resulting addition product can be used as a curing accelerator for epoxy resin powder coatings. In addition, an addition product of tolylene diisocyanate and 1-(aminoethyl)-2-methylimidazole can be used as a curing accelerator for a one-component epoxy resin/dicyandiamide system, for example Epon 828100 parts, dicyandiamide 6 Parts and 3.4 parts of the adduct

The product, stored at 40Â°C for 10 days, does not change viscosity and can be cured at 170Â°C/6s. Frank et al. dissolved 136 parts of imidazole in 408 parts of ethyl acetate, kept the temperature at 60-65Â° C., slowly added 278 parts of bisphenol A cyanate dissolved in 834 parts of ethyl acetate, and added the same temperature after the addition. After stirring for 0.5 h, the mixture was cooled, cooled to 30-35Â° C., and the white precipitate was filtered under reduced pressure to dry the product. The actual yield was 95%-97%. The product is used as an epoxy curing agent having good curing properties, excellent mechanical properties, and can significantly improve the imidazole storage period, and can also be cured at room temperature.

Marshine Power have specialized in supplying multi stranded galvanized Steel Wire Rope since 2001. We stock from 0.5mm up to 64mm in various constructions including 1X19, 7X7,6X19, 7X19, 6X36, 8X19, 8X36, 19X7 and 35X7 with both Fibre Core and Steel Cores. In addition to these conventional steel wire ropes we can offer special wire ropes from high quality manufacturers.

Most wire ropes operate in demanding conditions and must resist crushing, bending fatigue and abrasion. We recognize that it is vital that all of our wire ropes need to perform to the highest levels to maximize service life therefore increasing productivity for the end user. With our technical experience we have worked hard with our partners to ensure that all material is manufactured to the very best standards in the steel wire rope industry.

Each steel wire rope can be supplied fully assembled complete with end terminals such as a thimble eyes, swaged ends and wedge sockets as well as many other solutions. These cable assemblies are manufactured in house by our team of engineers complete to your specifications.

All material is certified and has full traceability in line with our ISO9001 procedures. 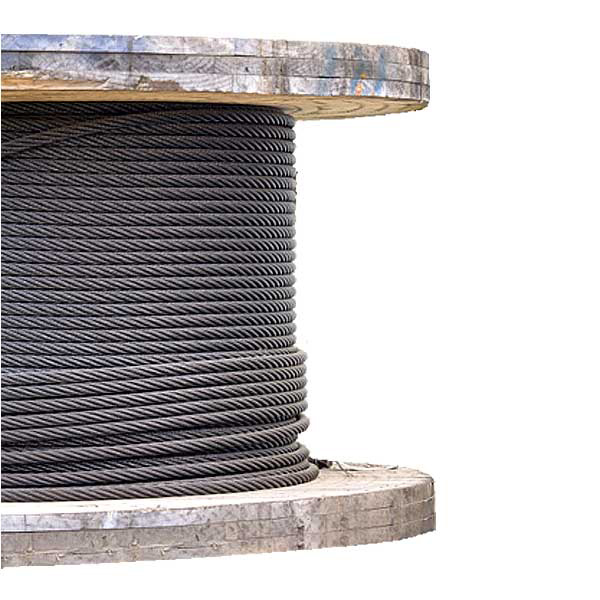