Using this new control technology, the micro-diamond sensor can detect changes in the magnetic field over a period of time, such as how the neurons in the brain transmit electrical signals to each other; and also accurately measure the magnetic fields generated by some new materials, such as Metamaterials for high-end lenses (artificial composite structures or composites with extraordinary physical properties not found in natural materials) and "invisibility" materials.

As early as 2008, MIT and Harvard University and other research institutions have studied some of the defects of synthetic diamonds that can be used in magnetic sensor technology. Professor Paola Cappellaro of the MIT Nuclear Science and Engineering Institute said that the Nitrogen Vacancy Center (NV) is a natural defect of diamond. It has very sensitive characteristics to the external magnetic field, just as the compass can determine the direction according to the magnetic field. The NV center is also called the diamond color center and emits specific colors, such as purple, yellow, and pink. A diamond that shines brilliantly is actually its internal flaws at work. When many of the NV centers inside the diamond are illuminated by the beam, the NV emits a red light. 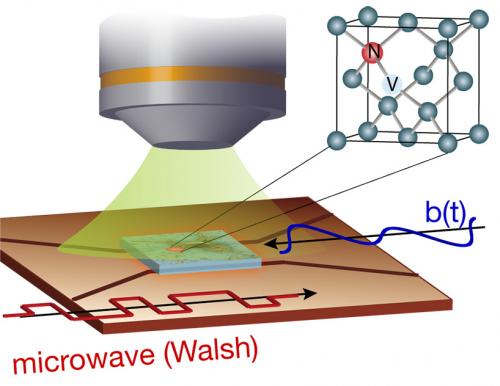 The optically initialized diamond nitrogen vacancy center (NV) under confocal microscopy was manipulated by the researchers using a coherent control sequence of microwave pulses, and the NV center measured the magnetic field profile over time; these magnetic fields were derived from biological or artificial magnetic sources.
To study the new sensor control technology, Cappellaro's team first illuminates the diamond with a green beam until a red beam is emitted, thus determining the exact location of an NV center. The scientist then applied a microwave field on the nanodiamond sensor to manipulate the electron spin at the center of the NV; this changed the beam intensity emitted by the NV center and adjusted the light intensity to the extent that it relied on both the microwave field and the external magnetic field.

The experiment used a diamond cube with a diameter of 3 mm as a sample; technically, scientists were able to experiment with nanodiamonds with a size of only 10 nm. Workers try to implant neurons on the diamond sensor and let the sensor detect the magnetic field information emitted by the neurons.

In previous experiments, researchers used electrodes to stimulate neurons and detect magnetic fields. However, the method of implanting the electrode is a very obvious invasive behavior. Whether the neuron is affected after being implanted into the electrode and whether it can operate normally as it is is an unknown behavior. Due to its carbon structure, diamond sensors are completely non-invasive after they are implanted into cells, and do not cause any damage or damage to cells and neurons.

Cappellaro explained that the NV center of the diamond sensor can be designed as an array that positions and detects the position of the neurons in an orderly manner, so that the signal transmission between the neurons is successfully detected and cracked.

In evaluating the research results, Cappellaro said: In the future, nano-diamond sensors can achieve real-time brain activity sensing, detecting and understanding how the brain works. Although there are still many unknowns in the future, the technology darling of diamonds has been and continues to bring constant surprises and progress to our research. (Compiled from 'Researchers develop new method to control nanoscale diamond sensors')

Azithromycin is manufactured by CSPC OUYI which is the main API product in CSPC OUYI which is the largest azithromycin manufacturer in China with capacity of 600MT per year. The product can meet CP, EP, USP,BP and is qualified by China FDA, US FDA, EDQM, WHO PQ, Indian DCGI, Russia FDA etc and is sold into domestic market and exported into all over the world such as Asia, America, EU, etc. CSPC OUYI is qualified supplier to many world-famous Pharma Groups. Its package is 25kg/fiber drum which can be suitable for domestic and overseas shipment. The azithromycin plant was accepted by all the foreign customers and institutions as most modern API plant. And there is dedicated space in azithromycin plant to micronize the product to meet the different particle size demand from the different customers.